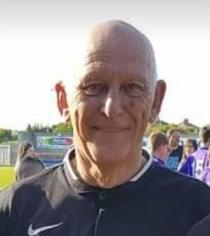 It was announced on Thursday October 1st 2020 that Tommy Daniels had passed away.

Tommy was born in 1944 in the North East of England. He started playing football in 1962 at 18 years of age for Walkergate Community Centre Football Club in the Tyneside Amateur Football League In 1962.

During 1964-1972 he played for Wallsend St. Columba’s Fc in the Newcastle City Amateur League and then Swan Hunters Football Club.
During this time he also played for the Grey Horse Football Club in the North East Sunday League then transferred to play for the Rising Sun Football Club.

In 1972-1973 he moved into the Lancaster area and played one season for Kendal United in the Kendal and District League.

At the start of season 1973-1974 he joined the North Lancashire and District Football League first as a player for 12 years before starting his refereeing career. He later refereed on the West Lancashire League. He was promoted onto the Northern Premier League as linesman (assistant).
He later took over as league fixture secretary for the Morecambe and Lancaster Sunday League where he continued to referee. After the demise of the Sunday league he refereed for the Morecambe and Lancaster Service to Youth League on a Sunday afternoon.
He stayed loyal to the North Lancashire League where he refereed for a further 46 years up to this season.
During season 2013-2014 he was presented with a 50 years Long Service Award by the
Football Association. This was to commemorate his services to football. The award ceremony took place at the Lancashire Football Association offices in Leyland