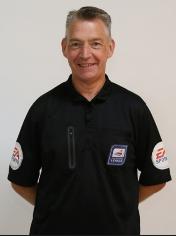 Mark Haywood, Referees Development Officer at West Riding FA & a former English Football League Referee has accepted an invitation to be the guest of honour at the “Premiership One" League Cup Final of the W&DSFL on Sunday 14th April.

Mark Haywood, former EFL referee with more than 300 matches in the middle, now a referee Development Officer with the West Riding FA, is the guest of honour at the Premiership One League Cup final of the Wakefield & District Sunday Football League on Sunday 14th April 10:30 am at the Nostell MW ground.

Having been a frustrated fan following his beloved “Sheffield United", Mark was challenged by a work colleague to take up the challenge of refereeing. Having passed the course in 1993, Mark progressed through the promotion system and ultimately reached the highest echelons of the game.

He went on to become a level 1 referee and officiated on the Football League Referee’s list for 15 years. Mark’s achievement included Play-off Games, Wembley & has been awarded his 3 Lions by The FA for his long service to football.

Mark is currently a Referee’s Development Officers with West Riding County FA & involved in the development, recruitment and retention of referees at grassroots football.