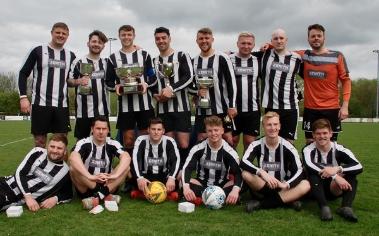 HISTORY IN THE MAKING AS THIS HORBURY-BASED OUTFIT SCALED THE HEIGHTS WITH A CLEAN SWEEP OF ALL THE MAJOR LOCAL & REGIONAL HONOURS. BRAVO & WELL DONE.

History was in the making when Wakefield & District Sunday Football League’s Premiership One side, Shepherd’s Arms, who were founded in 2001, completed a remarkable achievement with a clean sweep of the local and regional honours at Sunday’s Landlord’s Cup Final against Fryston AFC at the Nostell Miners Welfare’s ground.

Shepherds Arms kicked the game off and within the first 5 minutes they were 1-0 up with a goal from James Eyles from a through ball off Brandon Kane in midfield. The electric start continued and a Joe Walton’s pass put James Eyles clear on goal but his effort on target was ruled out for offside. The duo combined again, this time with Joe Walton putting the ball in the net but disallowed for a foul in the build-up. It stayed at 1-0 with 25 minutes played.

AFC Fryston responded with good runs from Brett Smith presenting opportunities for Jamie Simpson who forced two good saves from the opposition goalkeeper Andy Hey. The game became more competitive with both teams having chances to score and knowing the importance of the next goal.

A free kick awarded near the half way line for Shepherds Arms at minute 35 proved to be the goal of the match. The ball delivered by Brandon Kane was then volleyed into the net by a superb finish on the turn from James Eyles as he watched the ball coming over his right shoulder to give his side a 2-0 lead going into half-time.

Second half continued with a highly contested 15 minutes before a very good week for Joe Walton, who scored 4 goals in his sides 4-0 success two days earlier in the West Riding FA Sunday Cup Final, became even better with another goal to his name. His header from a deep corner by Brandon Kane neatly finished to put Shepherds Arms into a commanding 3-0 lead. AFC Fryston continued with intent to try get back into the match after the restart and were very unlucky to see James Dyson’s effort come back off the post.

The 3-0 advantage to Shepherds Arms meant they were able to play freely and chances were coming more frequently. A valiant display from the AFC Fryston goalkeeper Mark Edwards with outstanding saves kept the score line the same until a saved effort from a Joe Walton’s header lead to a rebound scored by Rob Bloomfield to make it 4-0 to finish the game.

A special mention to the referee Peter Walker and his assistants Nigel Stroud and Damion Edge for their game management of this penultimate Cup Final.

The Landlord’s Cup was presented to the Shepherd’s Arms captain, Tom Brook, by League Officer of the W&DSFL Steve Mercer.

The man of the match award, sponsored by Pennine Trophies and the Match ball, sponsored by Kings Head (Pollington) went to Shepherd’s Arms midfielder, Brandon Kane.