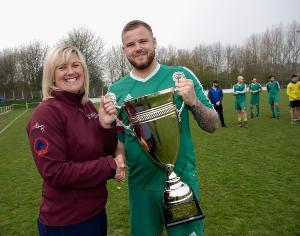 GRAZIERS FC LIFTED THE PREMIERSHIP TWO LEAGUE CUP WITH A RUGGED BUT DESERVED VICTORY OVER MUCH FANCIED ROCKING HORSE OUTFIT. MATCH REPORT BELOW:

With 23 points separating the two sides in the league and a winning ratio of 15 to 4 in favour of the Rocking Horse, the tables were turned upside down in this cup final thriller.

The Eastmoor outfit made a positive start and dominated the early proceedings with the thrusts of Shane Gillman and Rhys Bruce on the flanks a constant threat to the Graziers rearguard whose keeper Jordan Ripley was twice called upon to foil Rhys Bruce and Danny Whiting respectively with noteworthy stops.

At the other end, Rocking Horse keeper Steve McDermott came to his sides rescue with a full length save from Graziers Ryan Wilby. However, against the run of play, it was the Graziers who took the lead in the 16th minute of the match following a powerful effort into the roof of the net from their captain Chris Wildie for a shock 1-0 lead.

The Rocking Horse upped their tempo and saw Danny Waite (twice) and Lewis Whiting force the Graziers keeper Jordan Ripley to work overtime and into match saving stops. However, at the other end on the half hour mark, Rocking Horse captain Shaun Cornish uphanded the direct run of Mark Atkinson inside their danger zone and conceded a penalty which saw Kane Hempshall convert with aplomb to give his side a surprise 2-0 half time lead.

A brief flurry saw Ben Wood and Ben Laycock go close before an excellent cross from the right by attacking fullback Shane Gillman saw Laycock fail to make a clean headed contact from an unmarked close proximity of the goal for a golden missed opportunity five minutes from half time.

Graziers knocked the wind out of the Rocking Horse sails with their third goal of the match in the 51st minute when the persistence of Mehir Hussain forced an error and saw Kane Hempshall pounce on the loose ball to drive a low effort on target for his brace of the game.

Rocking Horse fought gamely and saw Danny Waite hit the base of the Graziers post but his side failed to breach the stubborn Graziers rearguard who stood solid and firm in the face of a late flurry to secure a well-deserved victory.

~ The man of the match award, sponsored by Pennine Trophies and the Matchball, sponsored by Kings Head (Pollington) went to Graziers FC captain Chris Wilde.