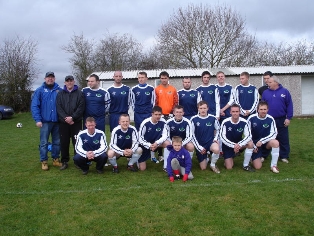 This News will be updated weekly displaying the 2 most recent league rounds ups. Round ups older than 2 weeks are available for viewing in the Master Worcester League Weekly Round Up Document via the download option.

In their first season in the Worcester & District Football League, Newtown Sports are through to the semi-finals of the Baylis Cup after a 3-1 win at Malvern Rangers. Josh Asquith, Joe Mallett and Matt Bannister were on target for Newtown with goalkeeper Nick Jaye saving a Rangers penalty in the first half. Also through are Powick who had a comfortable 6-0 win at Malvern Town Reserves where Chris Grubb and Andrew Martin both hit hat-tricks.

Upton Snodsbury won 3-0 against AFC Heenans in the quarter-finals of the Katherine Rayer Cup with goals from Keith Davies, Steve Spencer and Richard Congrave. Steve Lutz and Scott Morris both bagged a brace as Martley Spurs eased through 7-1 at HDNL Sports. Martley Reserves went out though, losing 6-1 at home to Arrow 2000.

AFC Mazak are making a late run for promotion in the Sunday League Division One, Dean Halsall firing a treble and Shane Smith adding a double as they hammered Blue Star 7-0. Coppertops still lead the table, Stuart Williams netting twice in their narrow 3-2 win at Malvern Radar.

There was a major shock in the Premier Division where CMB Sports eased their relegation worries with a 4-1 win against reigning champions Arrow 2000. Paul Bennett (2), Jamie Shepherd and Ollie Dyde were on the score sheet for CMB. Mark Owen netted six times and Richard Taylor hit a hat-trick as Martley Spurs thrashed Callow End 11-1. There were doubles for Simon Vaughan of Perrywood who won 4-0 at Crowle and Ashley Millard in Upton Snodsburys 5-1 home win over Droitwich Spa Eagles.

In the Saturday Division VBL Sports cruised to a 10-0 victory at Northway. Scott Jones cracked a treble and there were doubles for George Martin, Paul Bennett and Marc Burrow. Veteran GDL Athletic secretary Alan Southwick netted four times and Luke Hemming scored twice in their 7-0 win against Worcester Anchors. There was a brace each for Shane Smith of Hallow who won 4-0 at YM Rangers and Ollie Garfield as Newtown Sports won 5-1 at West Malvern TC.

Red Horse won their Nursing Sunday Junior Cup semi-final with AFC Heenans 3-1, Matthew Staley notching a hat-trick. They will play Perrywood in the final on Sunday 10 April (7.00 p.m.) at St Georges Lane, home of Worcester City F.C. VBL Sports won 5-0 at VFC Keyz in the semi-final of the Minor Cup, Gordie Beauchamp netting twice. In the final on Sunday 17 April, they will meet KGV Worcester, also at St Georges Lane.

DOWNLOAD THE MASTER ROUND UP PDF DOCUMENT FOR EARLIER REPORTS