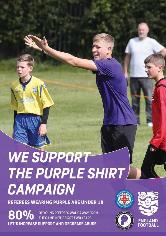 Referees under the age of 18 in West Riding will be provided with a free purple shirt from West Riding County FA to wear on match days when officiating, aiming to increase support for young referees and create a better environment for them to develop.

Last season WRCFA saw a 16% rise in reported cases of abuse against U18 referees from spectators and a 9% increase from players. Four-in-five young refs claim they have faced verbal abuse and nationally, 80% of young referees walk away from the game within two years.

Mark Haywood, WRCFA Referee Development Officer: “We are committed to developing all of our referees and this is an important step for those first entering the game. Players and spectators must understand that young match officials are on a learning curve – and wearing a Purple Shirt is not only a reminder of this, but also an opportunity to support and encourage them.”

Hannah Simpson, WRCFA Chief Executive said: “Next season the purple shirts will serve as a visual reminder to players and supporters that referees are entitled to conduct their vital role of match officiating with Respect and also that those under the age of 18 remain protected by safeguarding children legislation.”

We are now on social media