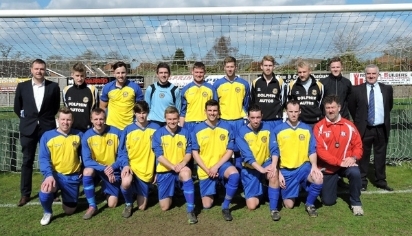 In the FA Inter League Cup Almary Green Anglian Combination beat Northamptonshire Combination, 5-1, at Wroxham. There was a minutes silence before the match for Tony Dickerson our President, whose funeral is on Monday.

The match was played in a very good spirit, with no problems for the match officials. The first half was evenly contested with both teams creating chances. 10 minutes into the second half, that all changed. Tom Cullumbine opened the scoring and added another 2 minutes later. A few minutes later Daniel Foreman scored two goals within a minute, to make it 4-0. The game then settled down, until Northampton pulled a goal back after 87 minutes but Tom Cullumbine got another a minute later, to complete his hat-trick and make the final score 5-1. In a very good performance by all the players, Tim Henery received the man of the match award. Well done to all the players and all those involved who helped with the team. Thanks also to Wroxham FC for the use of their facilities.