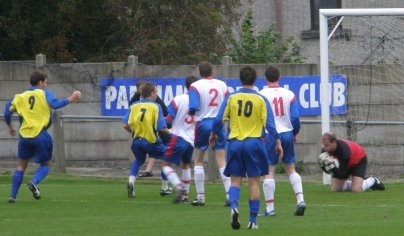 Anglian Combination travelled north to play Lancashire Amateur League on 19th Sep 2009 at Padiham, a few miles from Burnley, in the FA NLS Cup. Although we went 1-0 down through an early penalty, the team were playing well and were rewarded when Liam Davies equalied. It was still 1-1 at halftime, but unfortunately midway in the second half, we conceded two quick goals to make it more difficult. Ian Morgan pulled one goal back on 75 minutes but although we pushed forward for another goal, they held out to win 3-2. Our players all worked hard and the result could have gone either way. Many thanks to Terry Beane, Paul Grady, John Covell and all the players for all their efforts and for taking the time to make the long trip up to Lancashire.