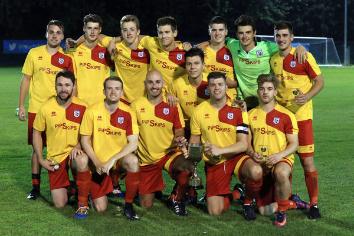 Congratulations to Mulbarton Wanderers on winning the Don Frost Cup, 14th August 2017. After drawing 2-2 with Harleston Town, they won 9-8 on penalties. See match report below.

Mummerry Cup winners Mulbarton Wanderers lifted the first silverware of the Anglian Combination season at the FDC on Monday night when they defeated Sterry Cup runners up Harleston Town 9-8 on penalties after the two sides played out an entertaining 2-2 draw in the Anglian Combination annual season curtain raiser, The Don Frost Cup at the FDC in Bowthorpe on Monday evening.
The two sides, who are familiar opponents after meeting each other 4 times during the 2016/2017 season, were evenly matched in the opening stages with the game starting at a high tempo. Scott Roberts had a dangerous free kick for Harleston but smashed it straight into the wall before Ben Thompson at the other end had a huge penalty claim for Mulbarton waved away when he looked to have been felled by Harleston keeper Nathan Pauling. Harleston began to get on top of possession and midway through the half they took the lead when a fine pass from Burke found Sam Grady and he spotted Wright off his line and deftly chipped the ball over his head from 18 yards to find the net. Harleston almost doubled their lead 5 minutes later when another deft chip, this time from Scott Roberts was superbly tipped onto the cross bar from Mulbarton keeper Tom Wright. This spurred Mulbarton back into life and after a spell of pressure they equalised when the impressive Elliot Altay smashed home to level the scores after originally being denied by a good save from Pauling. The game looked to be heading in to the break even, however, with 4 minutes to go in the half, Harleston regained the lead when a Scott Roberts corner evaded everyone and Nathan Russell scored from close range at the far post to give Harleston a 2-1 lead at the interval after an evenly matched first half.
The second half was a scrappy affair for the first ten minutes with a number of free kicks for both sides interrupting the flow of play. Harleston now seemed happy to rest on their laurels as Mulbarton began to dominate possession and put the pressure on Harleston in search of an equaliser. Dangerman Ben Thompson fired wide for Mulbarton from 12 yards after a fine free flowing move opened Harleston up. It was Mulbartons Ben Thompson who went close again 10 minutes later when he latched on to a short back pass to go through one on one with Pauling but the Harleston keeper made another good stop to retain his sides lead. With just over 10 minutes to go Mulbarton finally made their dominance pay and it was no surprise that this time Thompson made no mistake when played through as he executed a fine finish into the bottom corner to make it 2-2. There was more drama to come with 5 minutes to play when Mulbartons Hayden Gibbons was shown a second yellow card and dismissed for a foul in the middle of the pitch. Town substitute Adam Burroughs had a half chance in stoppage time but this was easily gathered by Mulbarton keeper Wright and with the scored level at 2-2 the match went straight to penalties.
Town took first and the opening 3 penalties were all scored, before Dom Doggett for Mulbarton saw his penalty saved by Pauling to hand Town the advantage. The next 4 penalties were all scored which then handed Scott Roberts the chance to win the tie for Harleston but he blazed his penalty over the bar and Elliot Altay buried Mulbartons 5th penalty to send the shoot out into sudden death. The next 8 penalties were all scored with some impressive spot kicking on display. Sam Grady then stepped up for Harleston and his effort came back off the underside of the bar and out of play meaning Mulbarton keeper Tom Wright could win the cup for Mulbarton if he despatched his penalty and he confidently obliged. A second cup victory for Mulbarton at the FDC in a matter of months and a second penalty disappointment for Harleston at the FDC after losing to Fakenham on penalties in the Norfolk Senior Cup semi final back in February. A thoroughly entertaining clash to start the 2017/2018 season.