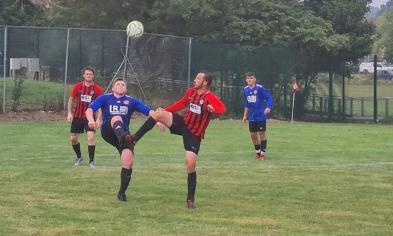 Round up of all the action in the Premier Division, Division One and Bodkin Cup

Five-goal Dion Orris stole the show as Ashford Genclik flexed their muscle to go three points clear at the top of the Premier Division table beating Mersham Sports Club 7-3. Orris has started the new campaign in the same prolific form he ended the last when he scored 13 goals in the end of season Bodkin Cup competition to help Genclik lift their first ever piece of silverware. His handful of goals were accompanied by Declan O’Driscol’s strike and a goal from the returning Tony Oladipupo to earn Genclik a second successive league victory this season and cancel out goals from Mersham by Louis Pacquette, Harry Hunt and Craig Calvert.

Brewmaster High Halden opened their campaign with a fantastic 5-2 home win against old rivals Market Hotel at a sunny Hopes Grove. Harry Linch claimed the match ball netting three times for the Brews as the new joint management team of John Ripley and Gary Gibbs got off to a winning start against the 22-time league champions. Further goals from Rhys Morison and Ben Squires-Quinn sealed the victory as Brewmaster ended an 18-game winless run against Market stretching back to 2014. Liam Smith’s Market side included new goalkeeper Louis Burton in their starting line up having signed him from AFC Locomotive in the summer, but he was unable to help his new team claim anything from the game despite Gary Penfold and Reece Mortimer both finding the target for the visitors.

Two goals from summer signing Ed Milloy helped Aldington earn their first points of the season as they returned from their trip to Stanhope & Beaver Rangers winning 2-0. Milloy put Aldington ahead after just ten minutes when he cut in from the left-hand side before his finding the back of net, but Rangers were unlucky not to have gone in at the break level when both Lewis O’Leary and Luke Walder hit the upright in the same attacking move. Teenage Aldington goalkeeper Harry Pearce kept his side in front with a great second half save from Stanhope’s Joe Burden while away defender Sam Gibson impressed at the back for Paul Guest’s side. But after an end-to-end last quarter of the game Aldington secured the victory when Milloy followed up after Rangers ‘keeper TJ Valler couldn’t keep hold of Ryan Petto’s long range effort, and the alert striker latched onto the loose ball to tap home from close range.

Shadoxhurst moved to the top of the Division One league table as they extended their winning start to the new season to three games beating Appledore 3-0 at the Spearpoint Ground. The Ox’s started well and looked the more likely of the two teams to draw first blood as Appledore held out until just one minute before the half time interval when Ryan Carter opened the scoring beating the visiting ‘keeper at his near post. Shadoxhurst continued the momentum into the early stages of the second period scoring twice more inside the opening ten minutes, first young striker Elliot McKenzie scoring his first goal for the club converting Thomas Moon’s low cross, before McKenzie turned provider to cross for Connor Gower to make it 3-0 at the back post.

Joshua Jones found the back of the net twice to continue to his great start to the new season as Egerton beat fellow promoted side Park Farm Rangers 6-2 away from home. They had to come back from going behind early on though as Joe Cox tapped home at the back post to give the hosts the lead. Tom Wilkes soon levelled for Egerton from the edge of the penalty area, before Jones scored his first of the morning after linking up well with Justin Howard, and the in-form forward almost doubled the visitors’ advantage before the break after being denied by the post. Jones did make it 3-1 early in the second half curling the ball home into the bottom right-hand corner of the net, before Howard got his name on the score sheet when he calmly slotted home from Jack Sullivan’s cut back. Defender Sean Halls hammered home an unstoppable effort from outside the area to score Egerton’s fifth before Dan Hall pulled a goal back for Rangers, but Egerton went on to score a sixth and complete the 6-2 victory when he rounded the ‘keeper and scored after a great run down the wing.

Red Heathens remain unbeaten from their opening two league fixtures and picked up their first win beating local rivals Charing Sunday 2-0 at home. Goals from Radoslav Davidov and Mitchell Fuller did the damage earning the Heathen’s all three points and local bragging rights as long serving goalkeeper Jason Ovenden kept a clean sheet for the home side as he approaches the 300-appearance mark for the club.

Two goals each from recent signing Josh Conlon and midfielder Matthew Hart saw Premier Division side Albion comfortably navigate past Bromley Green winning 6-0 in their Bodkin Cup first round fixture. Josh Conlon marked his return to Sunday League football with a brace having last featured for Red Heathens four years ago when he netted 19 times in the 2017/18 season to help them to promotion from Division Two. Hart’s double extended the pub sides lead before further goals from Sam Conlon and Steve Johnson sealed the victory as goalkeeper Ben Stevens earned a morale boosting clean sheet for the visitors.