November 2021 Manager of the Month 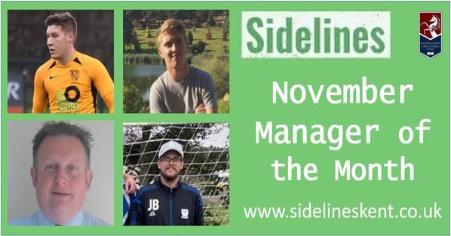 It’s hard to believe that we are already three-months into the new season, and as November comes to a close, it’s time to reflect back and recognise the winners of the Manager of the Month award for each of the four divisions:


PREMIER DIVISION
Recently appointed Ashford Genclik player-manager Adam Phillips gets off to a perfect start since succeeding Bobby-Joe Taylor in the hotseat as he wins the Premier Division manager of the month award. Genclik moved to the top of the Premier Division table collecting a maximum six points from their league wins against Folkestone Lions and Brewmaster High Halden, while the ‘Clik are also preparing for a lengthy county cup run this season having enjoyed a 5-2 away win at White Horse (Maidstone) in the previous round of the Kent Sunday Premier Cup.


DIVISION ONE
Park Farm Rangers manager Dom Grant enjoyed a very successful November and ends the month with this side sitting three points clear at the top of the Division One league table. Grant picks up the Division One manager of the month award after guiding Rangers to four wins from four games this month, including their progression to the fourth round of the Kent Sunday Junior Cup following last weekends 2-0 home victory over Barming Youth. Park Farm also picked up a maximum nine points in the league with wins against Folkestone United, Red Heathens and Charing Sunday to put them in the driving seat for back-to-back promotions following their voluntary rise from Division Two last season.


DIVISION TWO
For the second month in succession the Division Two manager of the month prize goes to Tenterden Sunday gaffer Matt Corden as the league leaders emerged victorious in each of their four fixtures in November. The ‘Dens are five-points clear at the top of the league standings and increased their championship credentials with comfortable league victories over Ashford United Thirds and Radnor Park Rovers this month. Tenterden also set up a Kent Sunday Junior Trophy last-32 clash with Mersham Sports Club Reserves next month following their 4-0 success away at AFC Borough Reserves last weekend, whilst they also progressed to the quarter finals of the Sheber Challenge Trophy beating Lolzors 2-0 earlier in the month.


DIVISION THREE
The Division Three manager of the month award goes to Ashford Dynamo manager James Bowerbank who also enjoyed a 100% winning record in November. The Royal Blues knocked out unbeaten Division Three leaders Lydd Town Sunday in the preliminary round of the Division Three League Cup this month as in-form striker Sam Buchanan’s hat trick helped Bowerbank’s side to a massive 3-2 home victory. Their good run of form didn’t end there though as league wins against both Saltwood AFC and Park Farm Folkestone saw Dynamo move up into second place in the table, five points behind leaders Lydd Town Sunday.