October 2021 Manager of the Month 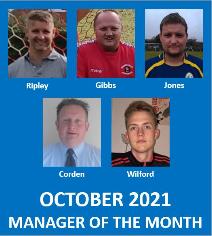 As we complete another calendar month it’s time to look back and recognise the managers of the month for each of the four divisions for October.


PREMIER DIVISION:
John Ripley and Gary Gibbs joined forces to manage Brewmaster High Halden over the summer and their new partnership is already baring fruits as they pick up the Premier Division manager of the month award after recording four consecutive wins in October. The Brews started October with a 4-1 home win over Maidstone League side Marden Minors to progress to the third round of the Kent Sunday Premier Cup, before that was followed up with a 4-2 home success against Stanhope & Beaver Rangers in the league. Their winning sequence continued the following week with a narrow 2-1 victory away at Mersham Sports Club while the villagers navigating their way past Division One side Hythe Athletic winning 4-2 to move into the hat for the quarter finals of the Bodkin Cup.


DIVISION ONE:
After a difficult September that saw Cheriton AFC concede double figures on two occasions, manager Chris Jones managed to turn around their fortunes in October to scoop the Division One manager of the month award. Three wins and a draw from their four fixtures last month have seen the Shepway side move up the league table to a respectable fifth position as they picked up seven points from a possible nine with wins against Sellindge and Folkestone United before a point in a thrilling 5-5 draw at home to Troggs. Jones also guided his side into the third round of the Kent Sunday Junior Cup with a 2-0 away victory at Frames FC.


DIVISION TWO:
League newcomers Tenterden Sunday currently sit proudly at the top of the Division Two league table thanks to an outstanding October that has earned manager Matt Corden the manager of the month prize. The Dens beat Insulators 4-0 to continue their county cup run while they also won all three of their league fixtures last month scoring 22 goals in the process. They started the month with the 10-1 thrashing of AFC Guildhall, before Corden’s side followed that up with a 5-1 away victory at local rivals Biddenden. They rounded off the month two-weeks ago beating Ashford Spartans 7-0 and now sit one point clear at the top of the standings ahead of second place Fox Sunday.


DIVISION THREE:
Joint managers Kyran Wilford and Barry Ince win the Division Three manager of the month award after guiding Pilgrims Sunday to three wins from three games in October. Pilgrims comfortably progressed into the third round of the Kent Sunday Junior Trophy thrashing Maidstone League hosts Yalding & Laddingford 7-0 away from home, while they also enjoyed further cup success beating Division Two side Radnor Park Rovers 4-1, again on their travels, in the second round of the Sheber Trophy. Their one league fixture last month saw the ‘Grims beat previously unbeaten Ashford Dynamo 3-2 to pick up only their second league victory of the season and move up to eighth place in the league table.