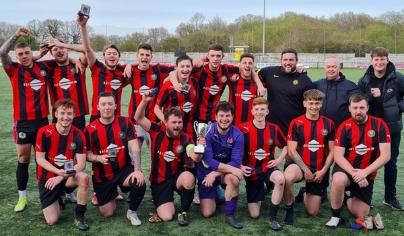 Fox Sunday lifted the Peter Pain Division Two League Cup in dramatic fashion beating a strong Tenterden side in a penalty shootout in front of a large crowd at Homelands Stadium. Fox skipper Jack Brown scored an injury time equaliser to make the score 2-2 deep into extra-time and send the final to penalties after it had looked like Charlie Sharp had won the tie to put Tenterden 2-1 only a few minutes earlier in a hugely entertaining clash.

In truth Tenterden created enough chances to win this game three-times over with the dangerous Clark Woodcock constantly proving to be a threat in front of goal, while left-winger Freddie Gill and Rhys Hobday on the opposite side looked to go around the outside of a compact and resolute Fox defence. But the Fox stuck to their game plan brilliantly to frustrate their opponents, soaking up relentless pressure and hitting Tenterden on the counter-attack, and when Tenterden did breach the Fox back-four, young goalkeeper Jamie Wallace came to the rescue making several outstanding saves to help his side to victory.

Many in attendance had expected Tenterden to romp to victory, the ‘Dens unbeaten so far in the league scoring an incredible 84 goals from their 14 fixtures to date. But it was the Fox who started the strongest of the two sides and went ahead after just 45 seconds when a deep free-kick from just inside their own half was played into the penalty area kindly falling to the well positioned Ivan Kirov who calmly slotted the ball across James Solly in the Tenterden goal.

Tenterden looked threatening from set-pieces in the first 20 minutes with Freddie Gill whipping the ball into dangerous areas four or five times in that period. Dens midfielder Dan Knott went close heading just wide before defender Tom Corden went even closer six-minutes later heading agonisingly just over the crossbar. Tenterden continued to pile on the pressure, Charlie Sharp bringing the ball out of defence before unleashing a 40-yard effort that fizzed over the bar, before Fox goalkeeper Wallace produced a good one-handed save to deny Gill. But the equaliser did eventually come midway through the first half when the excellent Clark Woodcock had time to turn on the edge of the box and finished well to make it 1-1.

Woodcock continued to pull the strings and linked up well with strike partner Matt Day to float the ball towards the back post only for Rhys Hobday to head wide, and Woodcock went close to netting a second just before the break when he brought the ball down brilliantly only to see his effort hit the post.

The Fox did create their own chances and looked to take advantage of dead ball situations, Kirov going close with a well struck free-kick seven-minutes into the second period, before Mac Parker’s delivery into the penalty area was misjudged by Tenterden ‘keeper James Solly but fortunately for the Dens number one no one was there to follow up at the back post.

Fox goalkeeper Jamie Wallace then produced a series of outstanding saves and interceptions that deserved its own highlights reel, first pushing Gill’s powerful effort around the post before making an incredible one-handed save low to his right to tip Sharp’s header out for a corner. Wallace then denied another Sharp effort before beating down a Matt Day shot when the former Ashford United striker was put through on goal. Tenterden saw a penalty appeal turned down by referee Jamie Turner when Fox defender Ben Bartholomew challenged Woodcock in the box, and Matt Corden’s side were inches away from sealing a 90th minute winner when Gill struck the crossbar as Fox held on to force extra-time.

At the other end Callum O’Neill run himself into the ground trying to hold the ball up, first seeing his effort deflected out for a corner while minutes later in extra-time forcing Solly into a good save, while Fox forward Brad Boxall worked tirelessly to keep the ball moving forward. But it was Tenterden who went on to score first in extra-time with six-minutes remaining, Rhys Hobday cutting in from the right before squaring the ball to Charlie Sharp who took one touch before unleashing an unstoppable strike into the top left-hand corner of the goal.

That goal looked to have settle it but there was more drama to follow in the final moments. First Tenterden were reduced to ten-men after the otherwise excellent Clark Woodcock was shown a second yellow card and sent away from the pitch, before the linesman flag was raised after Dens goalkeeper James Solly attempted a drop kick prompting the referee to award Fox an injury-time free kick on the edge of the box for handball outside the area. The ball was touched to 20-year-old skipper Jack Brown who smashed his low effort inside the left-hand post to score a dramatic leveller in the 124th minute and send the tie to penalties.

Man of the match Brown converted the first spot kick himself, before Fox goalkeeper Jamie Wallace produced two outstanding saves in the shootout to help his side win the trophy and their first cup final victory in 38 years.