February 2022 Manager of the Month 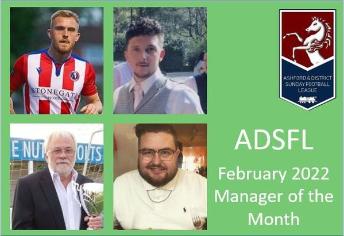 
PREMIER DIVISION
Ashford Genclik manager Bobby Joe Taylor picks up the Premier Division manager of the month award after guiding his unbeaten side to three consecutive victories in February and a place in the semi finals of the Kent Sunday Premier Cup. Genclik started off the month beating Stanhope & Beaver Rangers 5-2 to move to the top of the Premier Division league table, before goals from Adam Phillips and top scorer Dion Orris saw Taylor’s troops see off former winners Rising Sun winning 2-0 in their county cup quarter final clash away in Herne Bay. Last weekend Orris was amongst the goals yet again, this time hitting the back of the net on four occasions helping his side to a comfortable 8-2 win at home to Bromley Green in the Ashford Sunday Charity Trophy.


DIVISION ONE
Shadoxhurst have started to show some consistency in Division One in recent weeks and their upturn in form has seen them move back into the promotion places and earn manager Bradley Horne the Division One manager of the month prize. The Ox’ are unbeaten in their last four league fixtures, including three successive wins in February that has seen them move back up into the top-three in the standings and five points behind title rivals Egerton with a game in hand. Midfielder Kurtis Hopper has also found some goal scoring form netting in each of their three victories last month, as Horne led Shadoxhurst to home and away wins over Red Heathens as well as a 5-2 away victory at in-form Folkestone United.


DIVISION TWO
Manager Roger Hadlum certainly got the response from his players that he was looking for last month as Ashford United extended their winning sequence to three games at the end of February earning the experienced coach the Division Two manager of the month award. Since United’s disappointing 9-2 defeat to Burton Grove in January, Hadlum’s side have gone five games unbeaten in the league, including three victories in February starting with the 3-1 home success over Lolzors. New signing Bradley Godden scored the only goal of the game as United beat Hamstreet 1-0 a week later before they rounded off the month in style with a 3-1 away win at promotion rivals Fox Sunday.


DIVISION THREE
Folkestone Pirates gaffer Liam Underdown scoops his first ever manager of the month prize in Division Three after completing an unbeaten February and guiding the league newcomers into the promotion places in the table. The Pirates saw off local rivals Saltwood AFC winning 5-2 to kick off the month in style before coming away from promotion rivals Mersham Sports Club Reserves with another three points in a comfortable 4-1 victory. Last weekend the Pirates returned from their trip to Folkestone United Reserves 3-0 winners to extend their unbeaten league run to five games and move up to second in the Division Three standings.