Ovenden Reaches 300 Not Out! 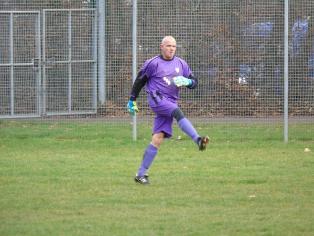 Red Heathens goalkeeper Jason Ovenden may not have been celebrating with his team picking up three points last Sunday, but the long serving shot stopper did achieve a personal milestone with the club at the weekend. Ovenden, who made his debut for the Charing Heath based side back in 2001, clocked up his 300th competitive appearance for Red Heathens in their 2-0 home Division One defeat to Park Farm Rangers recognising an incredible achievement and commitment to the Red Army.

Ovenden, now in his 17th season with Red Heathens, has amazingly been named man of the match 60 times in his career which averages at one-in-five games, and has also got on the score sheet four times. During his time with the club, Ovenden has helped his side lift several pieces of silverware, including most recently the Division One championship trophy in 2018/19 which led to their recent two-year spell in the Premier Division before relegation back to Division One last season.

That success marked back-to-back promotions after the Reds were promoted from Division Two in 2018, while Ovenden also collected league title medals earlier in his career helping the club win the Division Three and Division Two championship trophies in 2002 and 2003 respectively. He has also added two Sheber Trophy winners’ medals to his collection and was recognised personally winning the Division One Player of the Year award for the 2015/16 season.

Ovenden, who has previously played for the likes of Hollingbourne and Larkfield & New Hythe, has no plans to hang up the gloves just yet, and will back in action this coming weekend for game number 301 as Red Heathens welcome Division One rivals Hythe Athletic to Charing Heath hoping for a victory to take them back up into one of the three promotion spots in the league table.