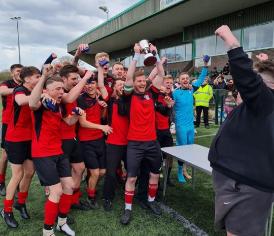 Goalkeeper Billy Howard saved two spot kicks in a dramatic penalty shootout to help his side Folkestone Pirates lift the first piece of silverware of the season in winning the Alan Speakman Division Three League Cup at Homelands Stadium. The Pirates recovered from going two goals down in the first half to local rivals Folkestone United Reserves, only to level up in the second period and take the game to extra time before triumphing 3-1 on penalties in front of 250 spectators in a hugely entertaining clash.

The Pirates looked to attack from the start and enjoyed most of the possession in the opening stages and went close to opening the scoring when tall defender Reece Pidgeon rose the highest from a set piece delivery but headed his effort just over the bar. But it was Folkestone United who landed the first blow after a quarter of an hour when Jamie Burton’s corner delivery was only partially cleared straight back to him and his second attempt at crossing the ball into the penalty area was touched in by prolific striker Ashley Sales to put United 1-0 ahead.

With Pirates still dazed, United doubled their lead less than ninety seconds later when Tom Etherington was played through the middle and the experienced forward beat oncoming Pirates goalkeeper Howard to the ball to score United’s second goal much to the delight of their travelling supporters. The Pirates looked to play the long ball over the top with industrious midfielder Billy Benzie demonstrating his wide range of passing ability from the centre of the park and utilising the speed of left-winger Jacob Molloy, but the United defence was equal to anything thrown at them while goalkeeper Josh Allon was alert and quick off his line to mop up at the back when required.

Pirates manager Liam Underdown’s half time team talk clearly worked wonders as the Reds’ came out for the second period looking much more determined to invade the United half of the pitch using the width to great effect with both Molloy and Charlie Soutar seeing plenty of the ball. Their first real chance of the second half fell to Molloy who connected to Kieran Frith’s right-wing cross brilliantly on the volley, but his strike just flew over the woodwork, while moments later the lively Taylor Phur hit the post.

United goalkeeper Josh Allon then made an incredible one-handed save to tip the ball over his crossbar as the Pirates continued to press to pull a goal back, and Allon again made a decent stop in the 67th minute but the ball kindly fell to Pirates midfielder Billy Benzie who followed up and side footed home to halve the deficit and make it 2-1.

With the Pirates still dominating the play, United were dealt a blow 15 minutes from full time when Matthew Webster was sent off for collecting two yellow cards in quick succession reducing them to ten-men, with a tiring United side now a man down against a more youthful Pirates eleven. And the inevitable happened in injury time as Pirates levelled the scores at 2-2, again Allon making a great initial block, but Aiden Costelloe was in the right place at the right time to equalise and send the tie to extra time.

United did create one more real chance with six minutes left to play when Daniel Green headed agonisingly over the bar, while midfielder Matt King worked himself into the ground covering just about every inch of artificial grass to try and keep United moving forward. But with no more goals after two hours of play the game went down to the lottery of a penalty shootout with Howard emerging as the hero making two decent saves to help his side to glory.