Man of the match Clark Woodcock netted a hat-trick as Division Two champions Tenterden landed their second piece of silverware this season beating Pilgrims Sunday 4-0 at Homelands Stadium last night. Woodcock also claimed the assist for Fred Gill’s opening goal before going on to score two well taken strikes and an injury time penalty as Matt Corden’s impressively talented side completed the league and cup double in their debut season.

Opponents Pilgrims should be proud despite the defeat, as the promotion-chasing Division Three side held on and were an even match in the opening half hour but were unable to recover from conceding twice in the final ten minutes of the first half. Management duo Barry Ince and Kyran Wilford have guided the ‘Grims to their most successful season to date in men’s football, with a Charity Trophy semi final fixture still to come and the Great Chart based side are potentially just one win away from securing promotion to Division Two for next season.

A large attendance flocked to Homelands Stadium for this Friday night encounter with sections of crowd interested to see if Tenterden could recover from their cup final nerves that saw them lose out on a historic treble when they lost on penalties to Fox Sunday in last month’s League Cup final. But in truth Tenterden executed their game plan brilliantly and their superior fitness levels and relentless attacking style eventually wore down a brave Pilgrims defence to see the ‘Den run out comfortable 4-0 winners.

Pilgrims showed great energy and passion in the opening exchanges with Ryan Osborne and Joe Munden proving they were more than a match for Tenterden’s forwards, and Osborne had to be alert in the tenth minute when he showed great initiative to clear what would have been a certain goal right on the goal line after Clark Woodcock had got his shot away. Pilgrims almost opened the scoring themselves seven minutes later when a well delivered corner from the left caused panic in the ’Dens penalty area, and after three blocked shots the ball was eventually cleared away to safety.

But the deadlock was eventually broken just after the half hour mark when Tenterden demonstrated how lethal they can be on the counterattack, as after clearing the ball from a Pilgrims corner, Woodcock travelled with the ball some 50 yards before squaring to the impressive Fred Gill to calmly slot the ball home from just inside the area. Woodcock was then soon denied a goal of his own when his decent finish was denied by the linesman’s offside flag before Woodcock again got in behind the Pilgrims defence only to see his effort deflected sending Pilgrims’ goalkeeper Kyran Wilford scrambling across his goal to ensure the ball missed the target.

Woodcock did manage to find the back of the net for real on the stroke of half time when his well hit half volley flew inside the right-hand post to double Tenterden’s lead and deflate a hard-working Pilgrims defence who had hardly put a foot wrong up until this point.

Tenterden came out for the start of the second period looking to add a third goal to kill off the game. Ryan Vaughan charged forward from the left back position and was through on goal only for Pilgrims defender Joe Munden to slide in at the last moment and take the ball off his toe, before Wilford made a good save to deny Woodcock who had previously controlled the ball and brought it under control with the outside of his right boot before cutting in on the left and getting a shot away from a tight angle.

Pilgrims had chances of their own but talented forward Brandon Foord-Divers was often isolated when in possession deep in the Tenterden half, while Joe Lewis tested his luck hitting a 35-yard effort only inches over the crossbar. Then came the sucker punch as Tenterden went 3-0 ahead with less than 15 minutes left to play, Woodcock keeping his composure to go around Wilford in the Pilgrims goal and side foot home into the empty net to all but seal the victory.

Woodcock sealed his hat trick to claim the match ball in the first minute of injury time when he converted from the penalty spot to make it 4-0 right at the end as the former Ashford United and Folkestone Invicta forward stole the show.

Although the hat trick hero may have grabbed the morning headlines, Tenterden played well as a team and were always threatening in the wide areas with Vaughan, Gill, Rodd and Corden particularly dangerous on either flank. Charlie Sharp was a rock at the back while Alfie Hacker also stood out in the first half battling with Pilgrims’ pair Phil Herz and Brett Moncrieff.

Congratulations to Tenterden who will now go on to test themselves at a higher level next season, and good luck to Pilgrims for the rest of the season in their quest for promotion and further cup success. 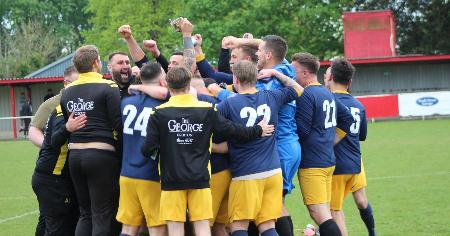