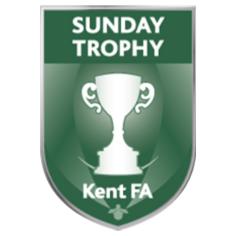 Like the two other county cup competitions, the three remaining Ashford & District Sunday League sides left in the Kent Sunday Junior Trophy all managed to avoid drawing each other as the countywide fifth round pairings were announced yesterday.

Fox Sunday face a long trip into the unknown after they were drawn to play one of Ellis Athletic or Foots Cray Lions in the last-16 of the competition. Ellis Athletic play in Division Three (fifth tier) of the Orpington & Bromley Sunday League but for various reasons including pitch conditions and cup commitments have only played two league fixtures this season, win one win and one draw to their name at present. Foots Cray Lions play even further afield and compete in Division Six (eighth tier) of the Woolwich & Eltham Sunday League, with the two sides scheduled to play their rearranged fourth round tie on Sunday 2nd January.

Ashford United Thirds were drawn at home to play Sheppey Sunday League Second Division (second tier) side New Inn Reds at Homelands Park Stadium. Like the Nuts n’ Bolts, New Inn Reds received a walkover in the previous round and if their league form is anything to go by, United top scorer Jordan Boorer will fancy his chances as the Sheppey side have conceded 27 goals from their four league fixtures so far this season.

Last and by no means least, Division Two leaders Tenterden Sunday have been handed an away trip to Rochester to take on Cliffe Woods Colts Reserves. Their opponents play in Division Two (fourth tier) of the Medway Sunday League, and like Tenterden are unbeaten so far this season and sit third in the table with games in hand on the top-two in the division. The Colts have seen off this likes of Sheerness East, Red Lion and New Road Hoops, the later in a comprehensive 11-0 victory, in previous rounds of the competition.