January 2022 Manager of the Month 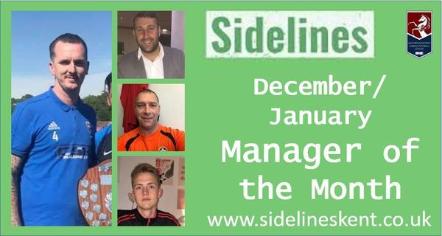 Here we look back at the winners for each of the four divisions for a joint December and January Manager of the Month feature.


PREMIER DIVISION
Market Hotel have enjoyed a stop-start season so far due to postponements and covid cancellations but their quest for silverware on the county stage has kick started their campaign. Market manager Liam Smith deservedly wins the manager of the month award for guiding his side to three consecutive wins over the two-month period including two big Kent Sunday Premier Cup victories on the road either side of Christmas. Market Hotel remains the only Ashford side to have won the trophy 20 years ago this season, and they continued their county cup run with a 4-1 victory away at Armada before seeing off Artois United winning 5-4 to progress to the quarter finals. Last weekend they returned to league action beating Albion 3-0, again away from home, with goals coming from Alex Coyne, Bradley Baker and Jack Taylor.


DIVISION ONE
Egerton manager Chris Holmes must be pleased with his sides recent form that has seen the Eagles soar to the top of the Division One league table and earn the gaffer the manager of the month prize. Despite a disappointing exit to title rivals Park Farm Rangers in the Kent Sunday Junior Cup before Christmas, the villagers recorded a maximum 15 points from their five league fixtures in December and January to go above Park Farm in their quest to gain promotion to the Premier Division next season. Egerton enjoyed a home and away league double over both Folkestone United and Appledore during the period scoring 15 goals across the four victories, while they also easily saw off promotion contenders Red Heathens in an impressive 7-1 home victory.


DIVISION TWO
Returning manager Justin Day had unfinished business when he was reappointed as Burton Grove’s coach at the end of November, and there’s no coincidence that his reappearance in the dugout has resulted in an upturn of form for the Division Two side. Day has guided Burton to six wins in seven games over the previous two-months, including a stunning 5-4 upset over Premier Division side Stanhope & Beaver Rangers in the second round of the Ashford Sunday Charity Trophy last weekend. That fixture only came about as a result of their earlier 2-1 victory over Folkestone Pirates in the previous round, while on the league front Burton have climbed away from the foot of the table and up to fifth with 12 points from a maximum 15. A 10-3 win at home to Radnor Park Rovers kicked off the run before Day guided Burton to a 2-1 win away at former club Lolzors before two big home wins, first thrashing Ashford United Thirds 9-2 before Ashford Spartans were undone in a 6-1 victory.


DIVISION THREE
There seems to be no stopping Pilgrims Sunday right now as management duo Kyran Wilford and Barry Ince lead the Great Chart based side on a promotion charge in Division Three. The Pilgrims management team earn themselves a second manager of the month award this season after recording five successive wins in December and January to move up to second place in the league standings and surprisingly book themselves a place in the quarter finals of the Ashford Sunday Charity Trophy. Pilgrims have been strong defensively this season which was shown in their 3-2 win against Folkestone United Reserves before Christmas and followed that up with a 2-0 victory away at Hythe Green and a 2-1 success at home to Folkestone Pirates. They then saw off Mersham Sports Club Reserves winning 4-1 on the road to move into the Division Three promotion places before rounding off the month in style knocking out Premier Division side Aldington thanks to a 3-0 victory in the Charity Trophy